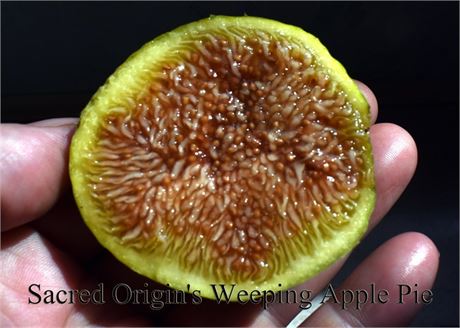 Weeping Apple Pie is a large yellow fig that oozes amber colored honey. This is a unique fig that has a strong weeping appearance at the crown which I've not seen before. I don't know if this trait carries over or not. This is a new discovery that im releasing to a few lucky persons. I intend to grow it out over the summer and offer rooted trees late summer into fall. I do not know if it is common, but some of the figs had zero seeds and displayed a rich golden interior which appeared to be un-caprified. I believe it will be common, but it has NOT been confirmed yet.

This fig has an amazing apple pie filling flavor. I am excited about this fig. I noticed that the mother tree, a unique seedling is not tall but it is wide and stocky, so it might be a semi dwarf type of tree making it great for potted growers. The tree is a prolific producer.

These cuttings will be at least 8 inches and have several nodes and they are thicker than a pencil.

Thank you for looking!