Bradford Watermelon Seeds (20 seeds) - The Sweetest Watermelon of the South

An Extinct Taste of Summer 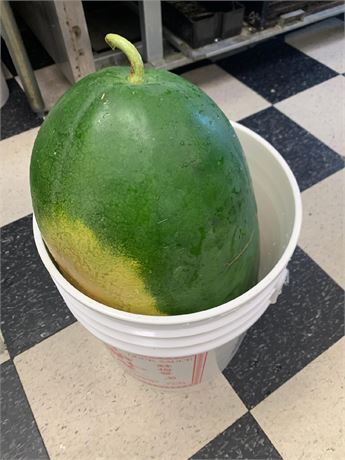 Payment Instructions
I have been experimenting with the best method of shipping, and right now shipping in the middle of the week seems to avoid the weekend rush. I typically ship once a week on Tuesdays, Wednesdays or Thursdays, depending on my availability. Please make a private request if you need this sooner.
Details
Description

HEIRLOOM. In the 1850s, Nathaniel Bradford developed a unique watermelon breed that was known as the sweetest and most flavorful, right down to its dark green skin. If you had a Bradford watermelon, you took measures to defend it. You had people with guns standing out by watermelon patches and you had young men forming watermelon clubs whose sole intent was to pilfer those watermelons... so the defenders poisoned certain unmarked melons in their field. They posted notice: "Pick at your own risk." Unfortunately, sometimes the poisoners forgot which melons were marked and it was not at all unusual to read newspaper stories of entire families being poisoned by a watermelon that they had themselves poisoned. Finally when America became electrified in the 1880s the wired melon became popular. If you were going out and trying to pick it all of a sudden the lightening zap would stop you in your tracks. There were more people killed in watermelon patches than in any other part of the agricultural landscape of america with the exception of those horse thieving cattle rustlers. The watermelon became fatal and the Bradford melon was one of the reasons why.

By the early 1900s, however, watermelons had been developed with hard, thick skins and tough rinds at the sacrifice of flavor, which were ultimately more profitable because they were able to be shipped with very little breakage. So the Bradford watermelon fell out of cultivation and became lost to the annals of history. However, although the commercial line disappeared, the Bradford family never stopped growing the original watermelon. These watermelon were believed to have gone extinct but have now returned to much acclaim & fanfare.

These seeds go for over $1 per seed at other online marketplaces, but if you act now you will receive 20 seeds for 25% off AND FREE SHIPPING! These watermelon seeds are white/pale tan. This is completely normal for this seed and does not indicate fertility.