× This item is no longer available for purchase.
Ended 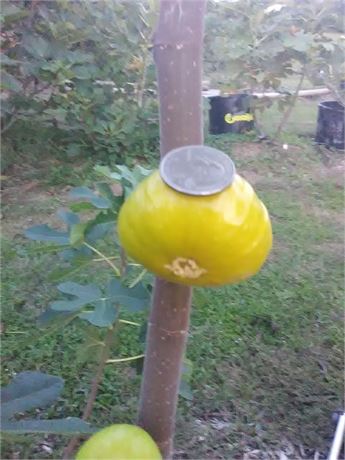 We are also going to be giving 10 of these trees away on Southernfigsforum please and go check out all our free giveaways .

There is a very extraordinary documentary story about a common man becoming a American hero and the family heirloom fig. Dr Cecil W. Clark was the local doctor in Cameron Parish in Louisiana.  Dr. Clark was deeply revered, with very deep southern roots in his community. Unlike the medical practice of Doctors today, Dr. Clark was always going out of his way to make house calls, and took care of the sick and injured and many people in need. He was always on call for his community. In June 1957 Hurricane Audrey came to Louisiana. Dr. Clark went to the hospital to evacuate patients and help with the injured. When Audrey had passed the death toll was thought to be 550 but will never be known. Dr. Clark stayed at the hospital, and never left his post and medical duties, serving his community. But in doing so Dr Clark unknowingly made the ultimate sacrifice, as he found out later that while he was serving at the hospital, that his own three children died in the storm. On December 7th 1957 at the 11th annual meeting in Philadelphia the house of delegates of the American Medical Association, he was named the American General Practitioner of the year. At that time, Dr. Clark was also the youngest physician  to ever receive this award. Dr Clark was named a American hero for his service and sacrifice and he also received numerous awards during his lifetime for his service. The Clark family had a heirloom fig which was enjoyed for well over 100 years. This fig is large and golden green colored fig, known for both fresh eating and canning.  The Clark fig tree itself is a very vigorous grower and the figs do not split.  This tree is also resistant to leaf rust, unlike many figs in the south. The Dr. Clark fig is a great southern heirloom fig named and that is now to be named in dedication to the American hero Dr Cecil W Clark. You can Google his name and hurricane Audrey and find a lot of information about this man. This is very excellent eating fig heavy producer.. a Louisiana heirloom named after an American Hero. To find more information and more photos and some history about Mr. Clark you can go to Southern figs forum.com I am Louisiana Mojo. Note the last two photos are Dr.Clark with JFK and him receiving a award.