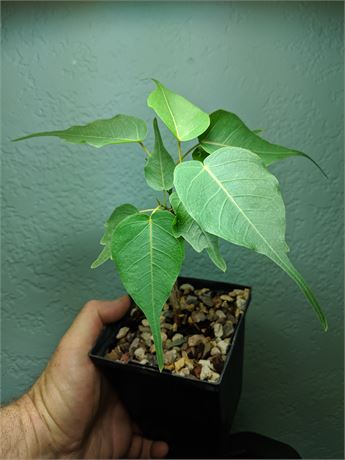 Available here is a young Ficus religiosa, the Sacred Fig , also known as the Bodhi tree, or Pippala tree. The Sacred Fig is considered to have a religious significance in three major religions that originated on the Indian subcontinent, Buddhism, Hinduism and Jainism. It is the tree under which Gautama Buddha is believed to have attained enlightenment, Hindu and Jain ascetics also consider the tree to be sacred and meditate under them. A must-have for any ficus nut, or anyone interested in the historical significance of the Ficus species.

This young tree is thriving ready to put on lots of growth. Hardy to zone 10B. Can be kept outdoors during warm months in cooler climates and brought indoors under bright lights during winter. Commonly used in bonsai. Hard to come by this species. My tree experienced temperatures below 30F but the tree showed stress at 25 degrees and was not allowed to get cooler than that.

Some of you may know me in Arizona, I've been collecting and raising rare Ficus species for about a decade, fruiting fig tree varieties, as well as other plants and trees. I've had multiple fantastic transactions on fig bid, it really is a fantastic website to share ficus. I'm a member on ourfigs, generally as an observer so best to contact me on here.