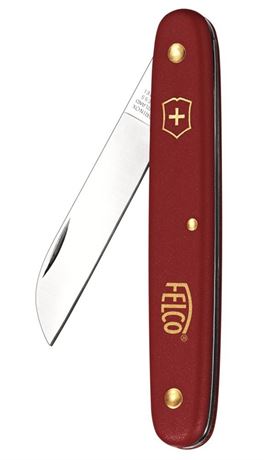 Please see my other listings for Parafilm grafting tape.

This little knife Swiss knife has the quality of FELCO horticultural tools backed by the strength of 135 years of Victorinox workmanship.

It just can't be beaten and everyone should have one in their grafting arsenal.  If you've never used a knife before please pick up a book and read a little about it.  My favorite is The Grafter's Handbook by R.J. Garner.  A clean used copy can be had for around 4 bucks.  I don't leave home without it.  Next, please review this forum thread about selecting a grafting knife for beginning grafters.  You can't buy this kind of info anywhere!

Then watch a few YouTube videos and in no time flat, you'll be a grafting pro.  Some of the better grafting videos for fig hobbyists right now are:

Some good video reviews about the FELCO/Victorinox:

A great video about sharpening your grafting knife:

Located in the village of Les Geneveys-Sur-Coffrane, around 5 kilometers from Neuchâtel in the French-speaking west region of Switzerland, FELCO SA is a company with a history dating back to the end of World War II, when Félix Flisch, a trained fitter and turner, set himself what was at the time a very ambitious goal: to create the best pruning shears and sell them in Switzerland, Europe, and beyond.

In pursuit of his goal, Félix Flisch bought an old watch-making factory.  Immediately, a new benchmark was set: where pruning shears had until then been but one of many agricultural tools, they became a tool of the utmost quality and precision.  Constantly improving the comfort and efficiency of his products, Félix Flisch sought to have them noticed and adopted by the most discerning professionals.

The reliability inherent in their simple design, almost unchanged 70 years later, caught the attention of winemakers at the region’s many local vineyards. With revenue from early sales, he set up his nascent business.

From its earliest days, FELCO has sought to bring in-house every process required to manufacture its product range.  This approach has allowed the company to systematically integrate technological advances into each stage of production, and to enhance them with know-how acquired over seventy years.  Today, FELCO is widely acknowledged as the leading brand in its field and has six subsidiaries distributing its products in more than 120 countries.

In 1884, Karl Elsener opened his cutler’s workshop in Ibach-Schwyz.  At this time Switzerland was still one of the poorer countries in Europe.  In the early years, Karl Elsener worked to combat poverty and unemployment in the Schwyz basin, creating jobs and helping stem the flow of emigration.

In 1891 he supplied the soldier’s knife to the Swiss Army for the first time. He went on to develop the Swiss Officer’s and Sports Knife – now the iconic Swiss Army Knife – in 1897, creating the foundation for a flourishing company that would be able to hold its own on the world stage.

From then on, his spirit of solidarity, deep roots in the region and strong commitment to solid values shaped the Victorinox company philosophy.

Victorinox steel is produced by the knife manufacturer of the same name.  The company is best known for manufacturing Swiss Army Knives, however, they do also make other multi-tools, folding knives, kitchen knives, and even bayonets and wristwatches.  The steels used in each of these products vary but often share similar properties.  The standard steel used is 1.4110 though there are variations in the steel type and Rc scale depending on where the steel is going.  For instance, the steel used in the blade for the swiss army knife is 1.4110, but for the springs and various steel riggings, 1.4021 and 1.4031 are used respectively.

For the blades themselves, the 1.4110 is the standard and its functionality truly reflects the intent of Victorinox.  This standard puts a strong focus on Chromium, but also utilizes; Carbon, Molybdenum, Manganese, and Silicon to name a few of the overriding secondary elements.  The Chromium normally sits between 13.3 to 14.8% ensuring its stainless steel properties.  The carbon will normally hold just below .70% in order to provide the tensile strength needed to last, and Mo, Mn, and Si are found around .75 to 1.0%.  The blade hardening occurs at 1900 degrees with an annealing temperature of 140 degrees giving it an Rc of 56.

The Chromium is pliable when hot which makes it perfect for a standard element in the compositions Victorinox uses.  The use of this steel for any knife results in a blade that is wear and corrosion-resistant.  Its tensile strength and hardness provide better than adequate functionality and its edge retention is more than acceptable, allowing it to last long enough and provide easy workability when sharpening.  While the Manganese and Silicon provide some strength and wear resistance, their function is primarily as manufacturing agents.

Victorinox has changed the compositions and manufacturing process for its products over the years but has since retained a fairly consistent system. They have been producing Swiss Army brand knives for over 100 years and do understand what makes a lasting knife or tool. This brand produces excellent quality knives which can take the wear and tear of use. They are affordable, consistent, and require little care other than standard steel cleaning.

We never 'pass the savings' of expensive shipping charges to the customer and always ship as economically as possible.  Sometimes this becomes a juggling act between cost-of-goods vs. cost-of-container vs. shipment size vs. shipping cost vs. margins.  With combined shipping, it's all in the packing and we'll always find the most inexpensive shipping method available.  But there are times when it's impossible to ship economically and we'll always let you know before paying.  The shipping for all items sold by NYCfigs will combine automatically with all other items purchased from NYCfigs.  Items that ship free can't be discounted.  In the rare instance of excess shipping charges, NYCfigs will refund after the invoice is paid.  This ensures your items are received in a timely manner.