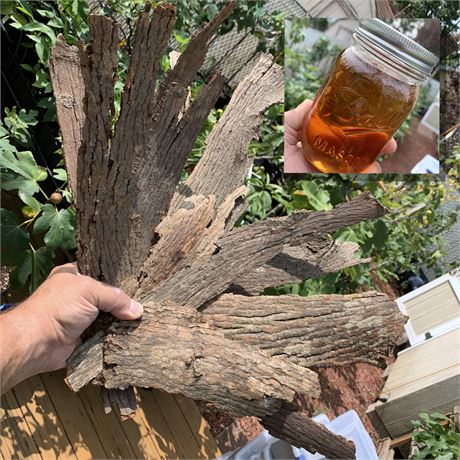 Halfway between the end of fig season and springtime, sometime just past the peak of winter, the sap from our mature maple trees begins to flow.  That's when you'll find my family in the woods collecting buckets full of sap to turn into maple syrup.  Last fall at Sunny Springs we scouted a new sugar bush and we're adding another 150-200 taps to our maple syrup production.  In a couple of weeks, it will be a busy season for sure.  But our search for additional mature maples led us through a corner of our property seldom used by people save the hunter willing to take a long walk through knee-deep snow and cross a few steep creekbeds.  It's a stand of mature and productive shagbark hickory trees we discovered about 10 years ago.  Our neighbors call it a honey-hole for deer because the animals are attracted to giant hickory nuts covering the forest floor.  We return to the trees every other year or so to harvest naturally exfoliated hickory bark to make Shagbark Hickory syrup.  If you've never had Shagbark Hickory syrup please keep reading.

Preheat the oven to 350 F.  Separate 1/2 lb of hickory bark into manageable pieces and place on a baking sheet.  Toast the bark for 10 - 15 minutes.  After a few minutes, you'll start to smell the smokey odor of hickory.  When the bark starts to take on a gentle golden-brown tone keep an eye on it and don't let the bark burn.  Burnt bark is not good for making syrup.  When the bark is toasted remove it from the oven and set it aside to cool.

Cover the toasted bark with water.  4-5 cups of water should do it but make sure the bark is just covered.  Bring to a boil and immediately reduce the heat to a simmer.  This is the only trick in the recipe.  Simmering rather than boiling is important as hard boiling extracts lots of bitter tannins from the bark.  Simmer the toasted bark gently for about 30 minutes until the water turns a dark amber color.  Can cook a bit longer for a stronger flavor.  After 30 minutes remove the bark and discard or save it for a barbecue or smoking food.  Continue to simmer, reducing the volume of liquid by 25%.  Continuing to simmer after removing the bark gives the final product a richer, more pronounced flavor.  Keep an eye on the pot because this happens rather quickly.  Don't worry, it doesn't have to be perfect.  Remove from heat.

When the extract has cooled enough to handle, strain into a pot and measure.  Put the extract back on medium heat and stir in sugar at a 2:1 ratio; that's 2 cups of sugar to 1 cup of extract.  Simmer until the syrup thickens to the right consistency.  Allow the syrup to cool before handling.

When your syrup has cooled enough to handle, ladle off into jars or bottles and store in a cool place or refrigerator.  Or, be prepared to can when the syrup is hot using any safe canning method.